There’s nothing like spending a little quality time with someone who just “gets” you. Double that pleasure when you can spend time with them on the backdrop of one of the most intriguing cities in the world.

That golden opportunity came to me in the form of a surprising Facebook message from my American friend Clint in February. Simply put, his message went something like this. “Peggy, me and a friend are meeting in Rome for a vacation in March. Want to join us?”

Well geez, he didn’t have to ask me twice. I booked my train ticket to Rome immediately. I couldn’t wait.

Clint is one of the few people in my life that has seen nearly all the homes I’ve had as an adult. A feat in itself, he’s joined in my adventures coast to coast in the US, and even across the pond in Italy. He meandered into my life ten years ago carrying homemade banana bread, and the rest was history. He had just moved to San Diego and wanted to get involved in the arts, so he signed up to volunteer in the marketing department of the Old Globe, where I worked. After a significant amount of homemade baked goods, he had permanently won a spot in my heart as a wonderful friend. We share a love of art and people and traveling, and are somewhat of a pair of lost souls. So naturally, an invitation to travel with Clint couldn’t be turned down.

I arranged my schedule to spend the weekend with Clint, and on Sunday his friend would join us after his flight arrived. 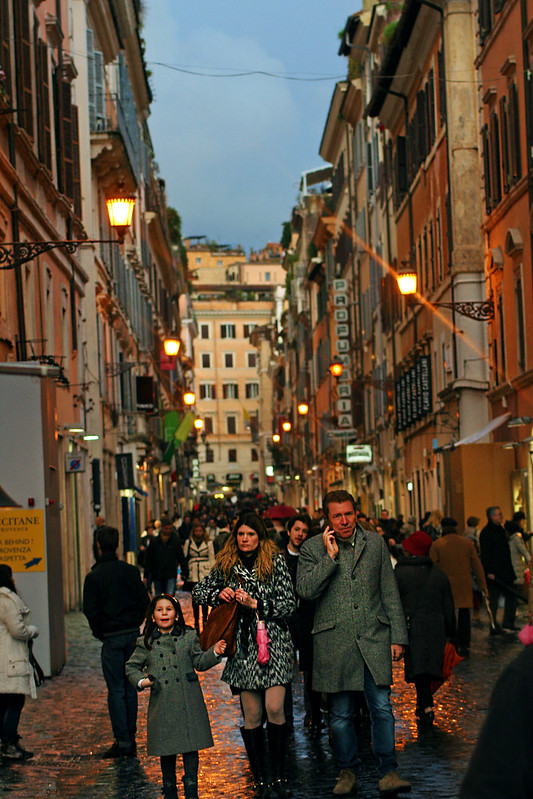 I was thrilled to have a sleepy but happy Clint all to myself on that rainy Saturday we spent meandering around the center of Rome with no particular agenda, 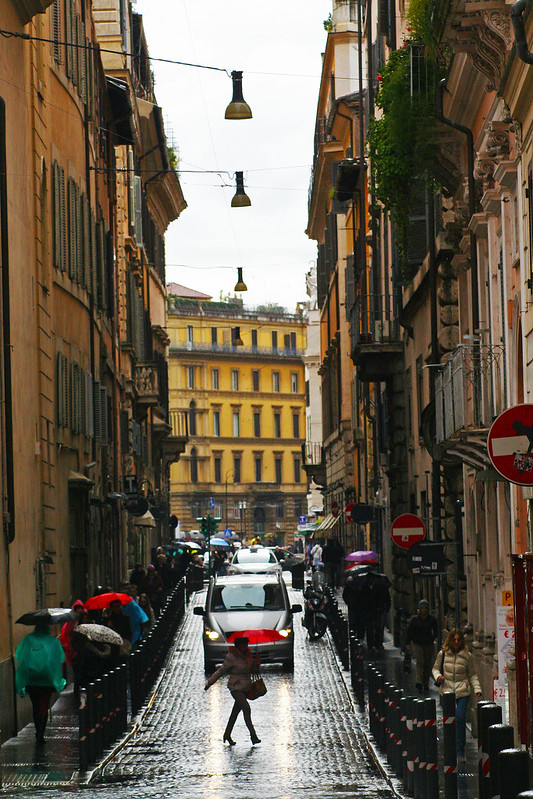 The rain just made for better photo ops.

interspersing glimpses of architectural wonders and warming up over tea and wine (in no particular order, depending on how the mood struck us). 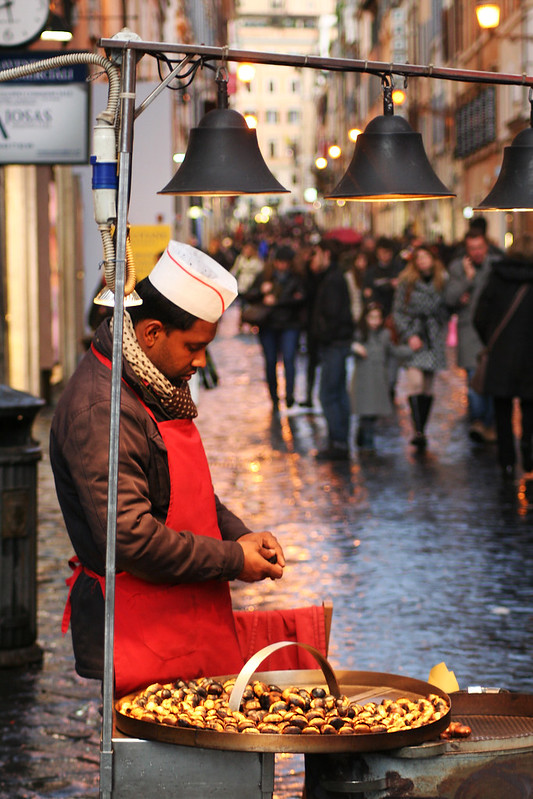 Clint has a way of truly savoring the moment, and when I spend time with him, wherever we are, he always manages to get me to look at things differently. 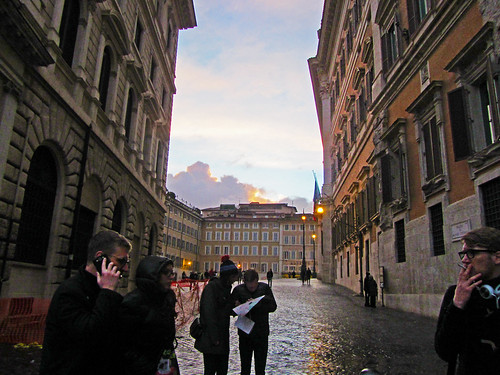 We stopped to do a selfie, but instead I took this photo that I love.

He spotted a balloon horse stuck in the ceiling of the Pantheon, which we stood and giggled at for what seemed like an eternity. 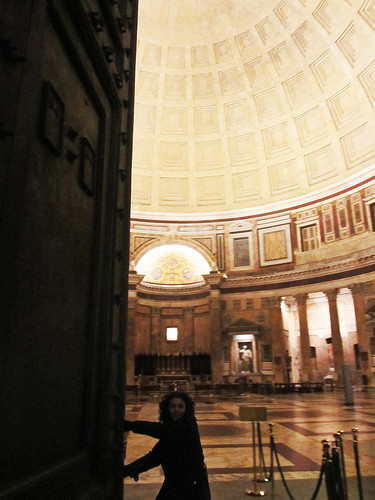 The closing of the Pantheon at the end of the night.

And despite myself, he managed to convince me to take a silly picture with Pinocchio (photo not included, sorry guys 😉 ) 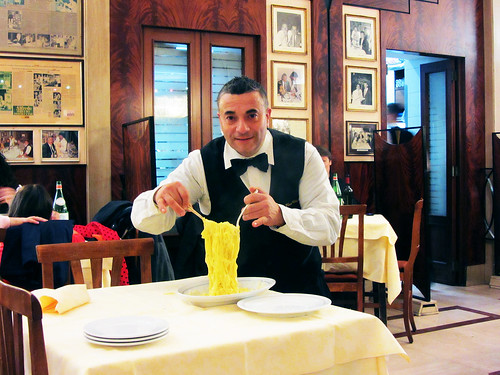 We proudly relished our tourist status that night when we went to Ristorante Alfredo for dinner (the home of the “American” pasta dish, Alfredo), which was actually on the recommendation of my student, who grew up in Rome. It was delicious. 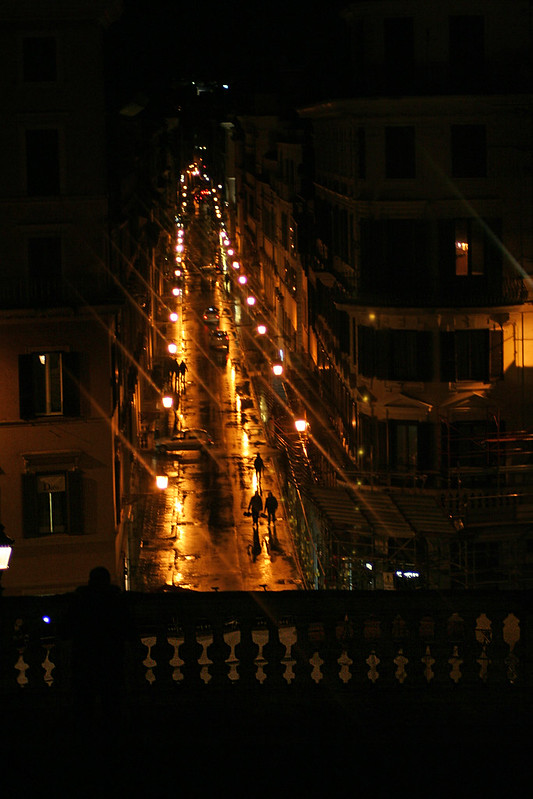 Our wonderful walk up the Spanish steps on our way back to the hotel.

The next day David woke us up upon his arrival from the Rome airport after his red-eye from Denver. David is a history buff (although the term doesn’t do his knowledge justice) who can’t get enough of historical cities, and our first introduction was that sleepy Sunday morning in the hotel in my pajamas. I had no idea what to expect from a day with David and Clint. Despite his long flight, David was already ready to start exploring. Poor guy, it was no easy task to get me and Clint dressed and out the door. 😉 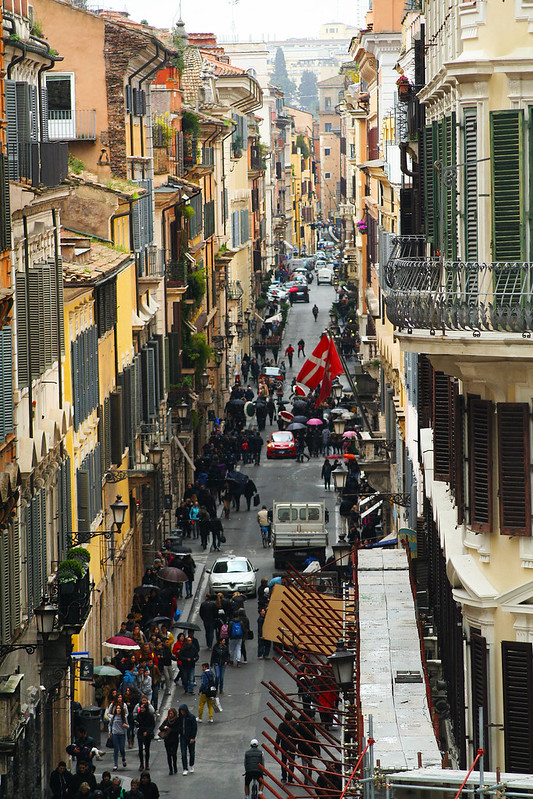 How could we stay in bed when we had this beautifulness waiting for us?

Being quite the gentleman he is, David deferred to my wishes for the day, knowing I had a shorter time to explore than he did. I was armed with a little wish list for sight-seeing in Rome, a list that I owed to an improvised english lesson with a student brimming with excitement about her recent weekend in Rome spent with her sister, a local. I was thrilled I had managed to find the list and had such a supportive crew with me with which to enjoy it. 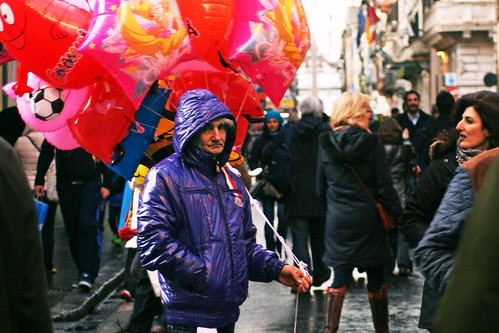 We started out the day in classic Clint/Peggy fashion, just meandering. 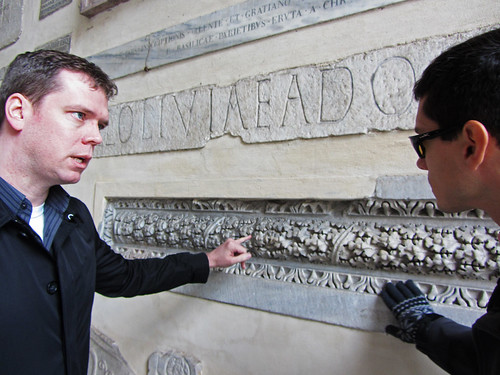 But now we had David, the perfect addition, who was able to legitimize our disorganized approach by explaining the history behind every random architectural ruin we stumbled upon in our meandering. 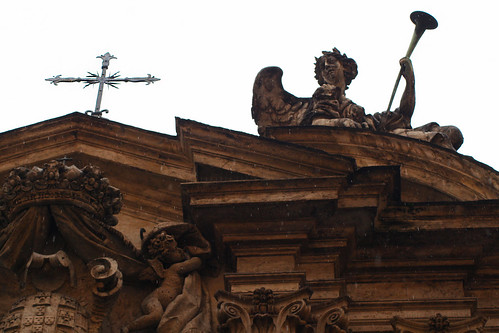 The rain coming down from the architecture made the angels seem like they were crying.

Which, in Rome, are about a dime a dozen. In between our history lessons and my photo ops, David managed to charm me with the sweetness that he is. 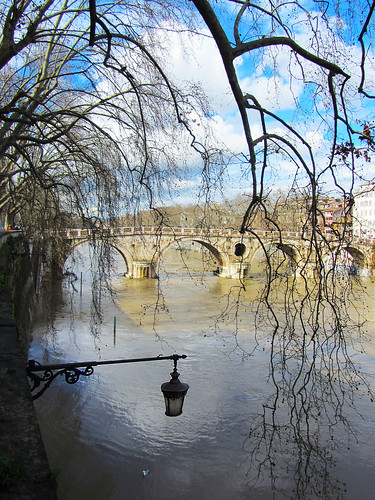 The trees were so romantic.

After a long trek to Piazza Santa Maria in Trastevere, highly recommended by my student, we needed to rest and eat a bit. David was more than content to stop and enjoy the area a bit longer, announcing it was his favorite neighborhood in Rome. Clint wasn’t in the mood for eating, but David enthusiastically copied my order for a Roman specialty (the dish even inspired him to learn how to make pasta by hand back home in Denver!), cacio e pepe with a splash of pistachio.  Heaven.  Over devouring each of our plates, I discovered how much we have in common, from blogging to traveling to friendships, David was one of us. A lover of people and places, and definitely someone I would make room in my heart for.

After an unexpected and truly impressive stop at St Maria in Trastevere Basilica, 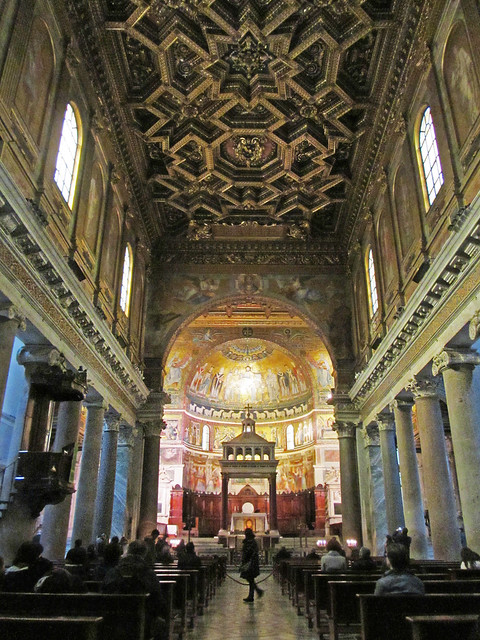 we continued on foot to a less widely known tourist destination called Piazza dei Cavalieri di Malta. I knew nothing but what I had heard from several students: you go there, you look through a key hole, and you see the best view in Rome. Sounded promising.

Amidst more history lessons and lots of laughs, we made our way to the Piazza dei Cavalieri di Malta, 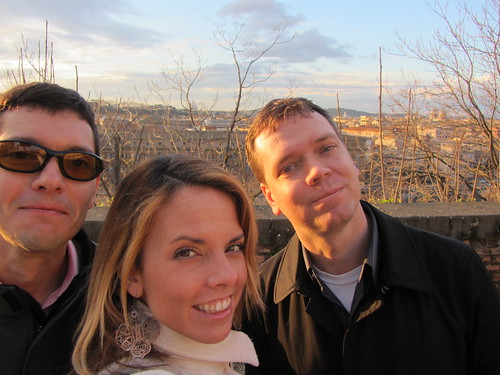 which we found at the top of a hill in the center of an entourage of churches and gardens with seemingly limitless exploration potential. 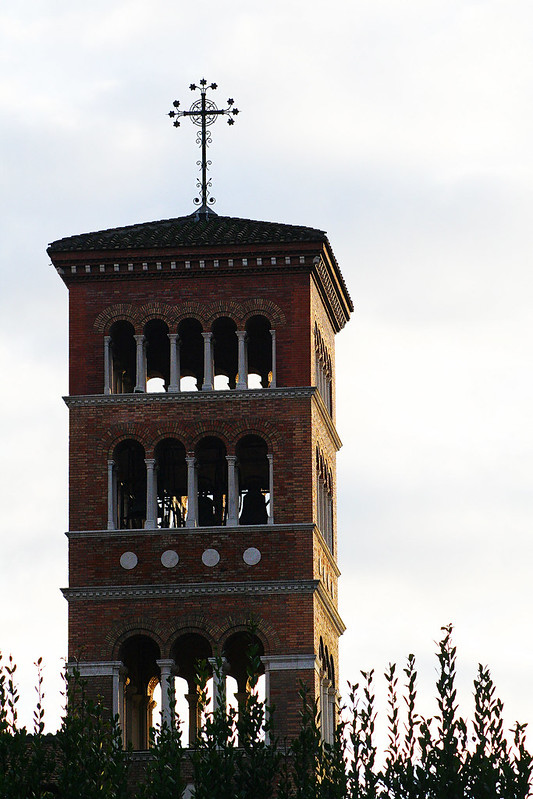 The light was catching the steeple just perfectly as sunset approached.

But where was the keyhole? 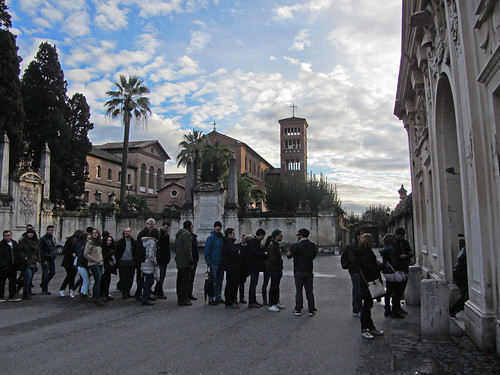 The line for the keyhole.

The keyhole was at the front of the long line of people. Why is it that the most obvious of things are sometimes the most evasive?  We got in line and waited about five minutes (there were no other Americans in line), and sure enough. The view from the keyhole was beautiful. 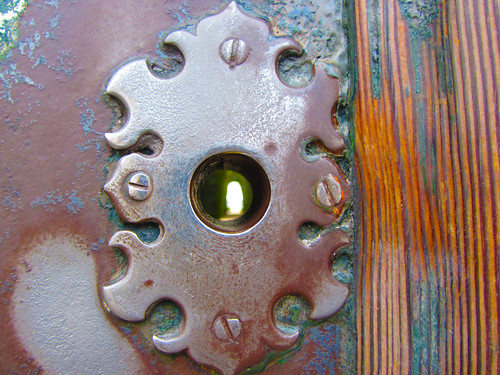 But so was just about everywhere on this beautiful hill…each garden, church, and view seemed to surpass the last. And we even caught the sunset. It was the perfect way to end the day. 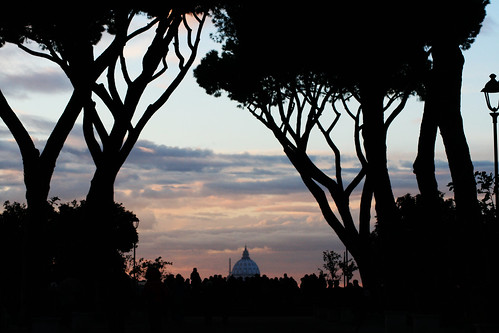 My train departure was impending, unfortunately. We grabbed a cab, enjoyed a whirlwind tour of the city amongst the craziness that is Roman traffic, 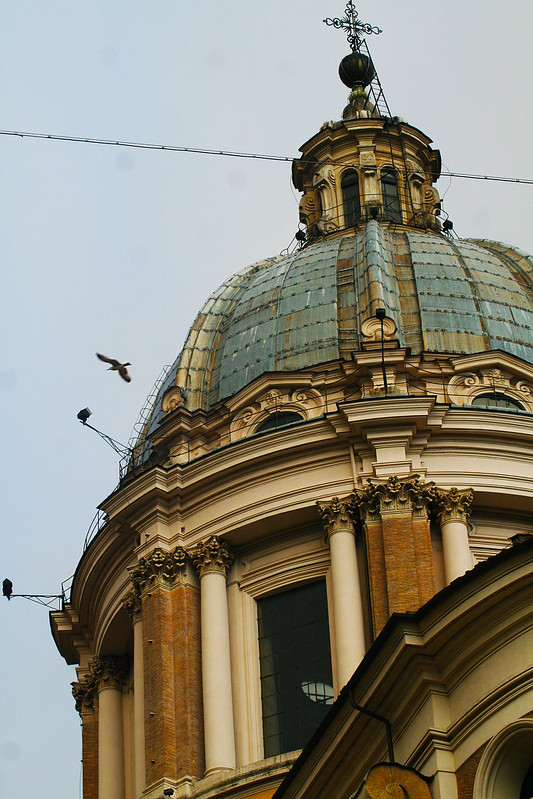 and ended up back at our hotel in time to enjoy a drink at the rooftop bar. If it is possible, Rome at night is even more impressive. The city was like a sparkling wonder…

I hugged the guys a hurried goodbye and ran to the station. It should have been a somber train ride home, but my disappointment over my short visit was quickly overridden by my giddiness over acquiring a fabulous new friend, seeing Clint again, and, well, being in Rome. Enough said. 🙂

17 responses to “My kindred spirits in Rome”

Follow Gracefully Global travels: Travel tips and travel guides for planning your next vacation! on WordPress.com

Looking for something specific?

What can I help you with?